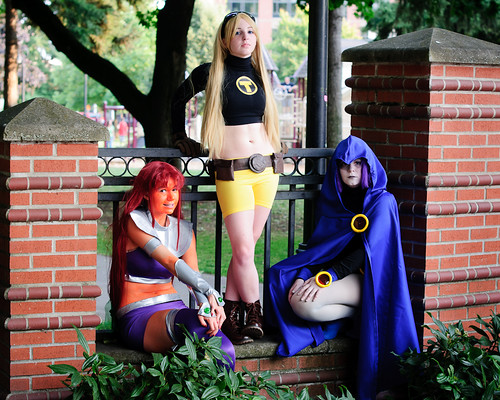 Kumoricon moved to Vancouver, Washington and expanded to occupy two hotels: the Vancouver Hilton and the Vancouver Red Lion on the Quay. In contrast to the previous two years in downtown Portland, where the space sometimes felt cramped and inconvenient, the new location was a treat. Having a huge park with a farmers’ market directly across the street from the hotel gave people an obvious place to go for food, photo shoots, and relaxation. It made Kumoricon feel kind of like a temporary small town of its own, with about 4,000 attendees roaming the area. 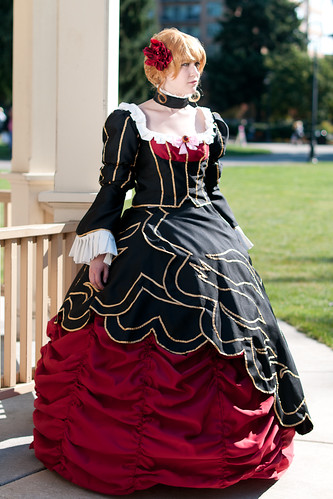 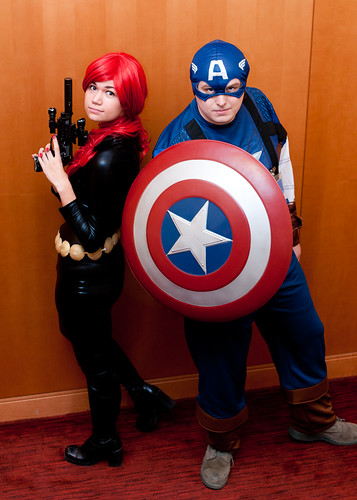 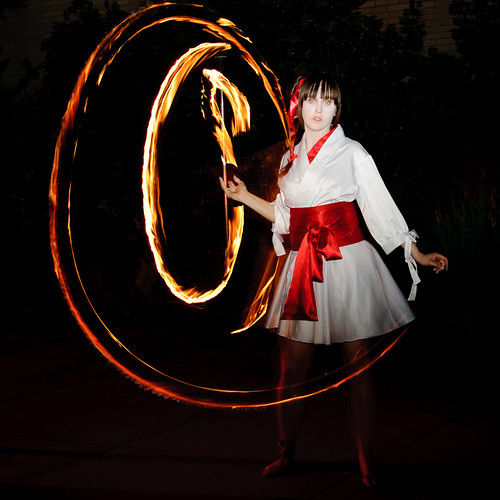 Registration lines were remarkably short, and many attendees breezed through in just a few minutes. I overheard some people mention that they were stunned by how quick it was, compared with previous experiences at this and other conventions. I’m sure everyone would be thrilled to see this become the new standard for conventions, and let stories of hours spent in a registration line fade into legends to be passed down to disbelieving newbies.

Kumoricon made this year’s schedule available in multiple formats, including downloadable content for the Guidebook app for mobile phones. If you have a supported device, Guidebook is the easiest way to organize your convention schedule. The app can display maps, keep track of the events you want to go to, and even create automatic reminders to tell you when an event is about to start. Some conventions only provide the names of events, but Kumoricon also included full descriptions of each event in the Guidebook app, which put everything in one place for easy browsing. 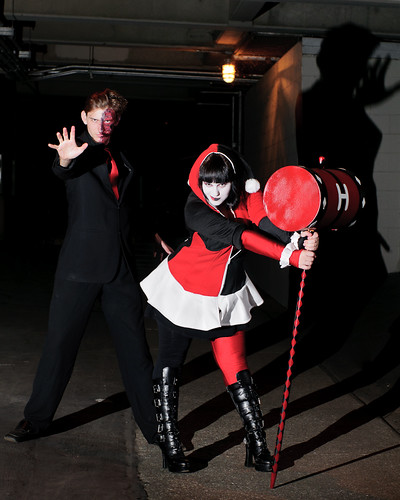 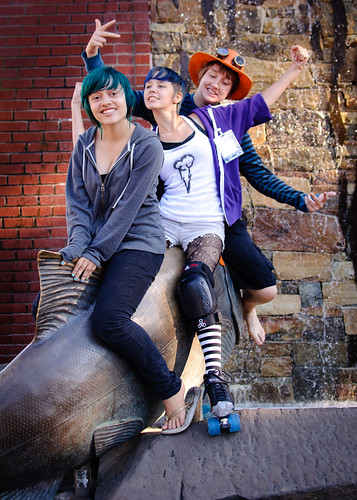 Though Kumoricon is a convention about anime, limiting its definition to that would be kind of like saying that Burning Man is a bunch of people camping. Kumoricon is also a social event for the cosplay subculture, a place to get together with friends and make new friends. Look around, and you’ll see lots of people greeting and hugging each other. It’s a giant 3-day party that transcends the individual events.

Actually, although it officially lasted only 3 days, there was also a “Day 0” on the day before the convention started, with no official events but a very similar atmosphere. People dressed in cosplay, and got together for photo shoots or just to hang out. There were also two different Day 0 “pre-parties.”

This year’s Day 0 was quite large, partly because a lot of people arrived Friday morning for the earliest possible badge pick-up, and then had the rest of the day available to start the convention early. Naturally, for some cosplayers this meant a final frenzy of last-minute costume construction. Some people finished costumes only hours or even minutes before an event or photo shoot began, a pattern soon nicknamed “Procrasti-con.” 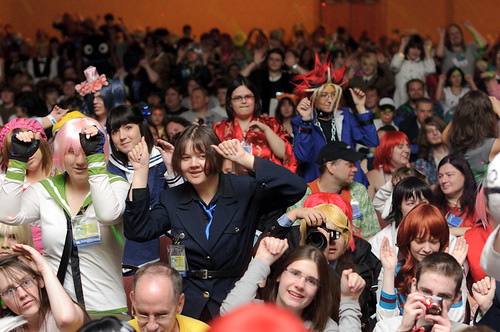 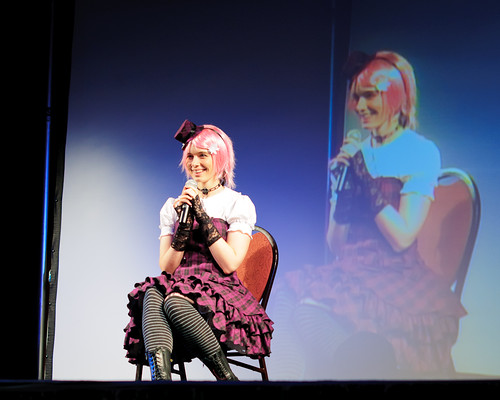 Fans at Kumoricon value audience participation, and during events it’s not uncommon for some audience members to occasionally shout back at the people on stage. Usually this is done in a good-natured and humorous way, and is generally tolerated if it doesn’t go too far. It’s a bit like being at a screening of Rocky Horror. And this fan-instigated humor sometimes leads to bizarre situations, like the fact that the most popular character at the cosplay contest was an empty chair.

It all started when a cosplay contest skit got off to a slow start, and at first the stage was empty except for a single chair. During the awkward silence before the first cosplayer in the skit had made his entrance, a few fans started cheering for the chair, and shouting “Chair! Chair!” People thought this was funny, so more and more people started cheering for chairs during subsequent skits, and booing when chairs were removed from the stage. The hosts played along, made references to chairs, and even held a “Chair vs. Table” popularity contest, which “Chair” won by a landslide. 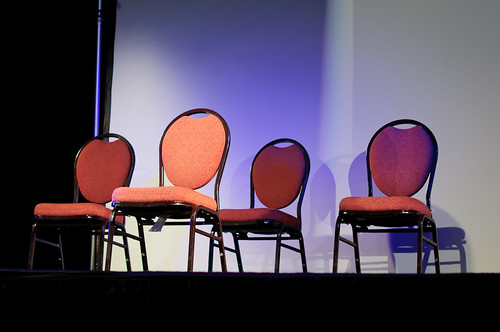 During the intermission, while the judges deliberated, four empty chairs were positioned on stage as if they were the main chair accompanied by three backup singers. Then music played, and the crowd cheered and danced as if they were at a concert by “Chair.” It was truly a strange moment to see a crowd going wild over four empty chairs on a stage.

Chair received over 700 votes in the Audience Choice category of the cosplay contest and technically won this category, though the actual award was given to the human runner-ups. However, not everyone thought this was funny. Some people were understandably disappointed that a joke about an empty chair got louder applause than people who had worked hard on their costumes. The chair joke wasn’t the best thing about Kumoricon, but it was a good example of the type of quirky thing that often happens there. (The next day, people joked about possibly cosplaying as Chair next year.)

Apart from the sideshow of “Chair,” the cosplay contest also contained some great costumes, skits, and dance routines. 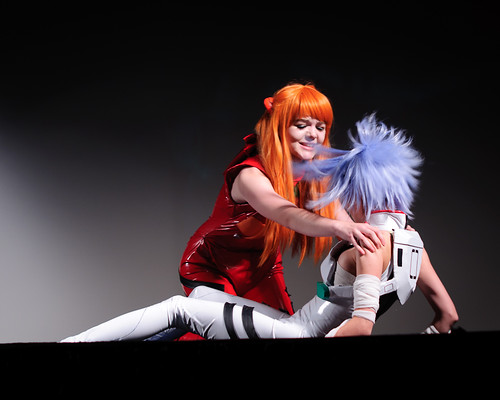 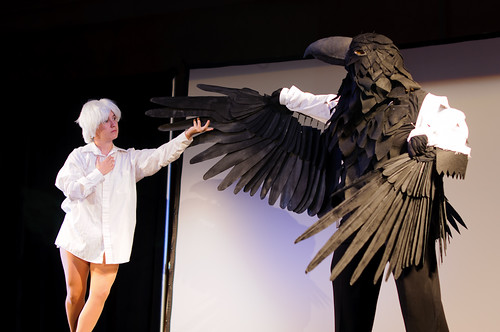 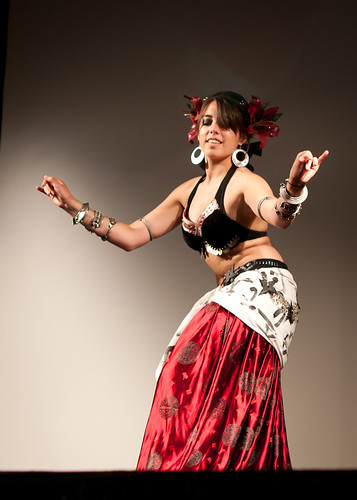 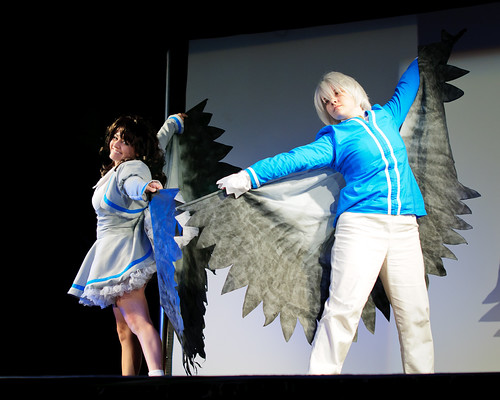 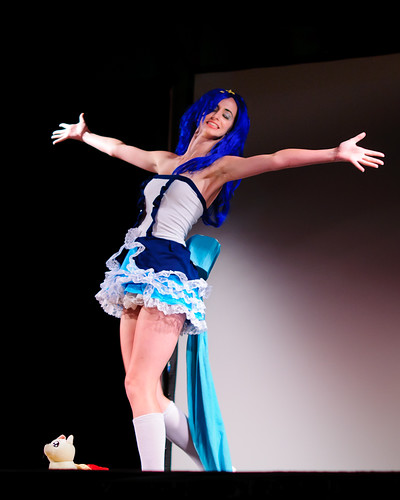 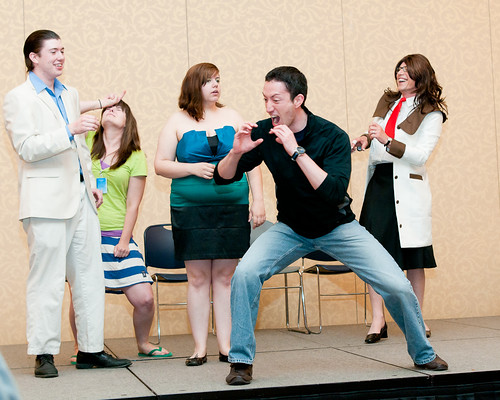 The panel “Whose Line Is It Anyway?” exemplified the Kumoricon style of entertainment. A standing-room-only crowd filled one of the largest hotel ballrooms to watch improvisational comedy by Kumoricon staffer Jon Bressler and friends. Although some of the participants wore cosplay, and the conversations touched on some anime themes, it wasn’t really an “anime event,” it was just a fun and witty show. The event was laugh-out-loud funny from start to finish, and featured a guest appearance by voice actor Todd Haberkorn, whose hilarious Godzilla impression was one of the convention’s most memorable moments. 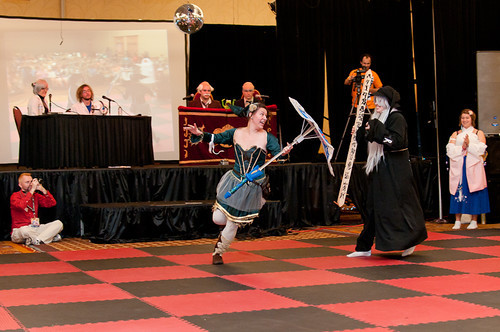 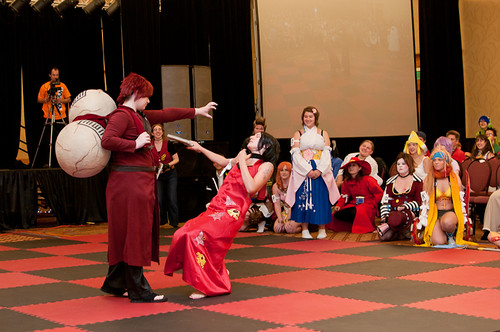 In Cosplay Chess, cosplayers act as chess pieces on a giant board, and dramatize a battle whenever a piece is captured. This year at Kumoricon, Cosplay Chess also had “color commentary” by two guys who cosplayed as the old men in the balcony from The Muppet Show, and told jokes done in the style of those characters. 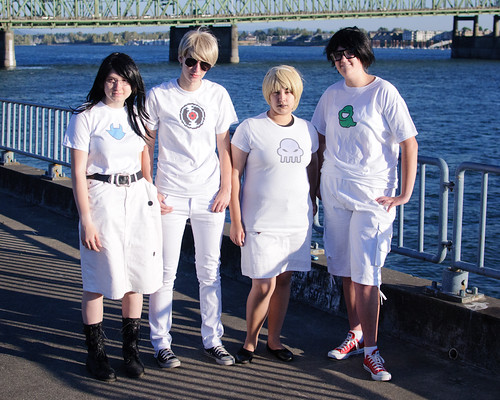 Every year brings new trends in cosplay, and the biggest one this year was cosplay based on the web comic “Homestuck,” a huge and complex story that currently is 6000 pages long (and still going). Maybe part of the appeal of Homestuck for cosplay — besides the popularity of the comic — is that it offers both easier and more difficult cosplay options. The human characters look like normal kids who wear characteristic T-shirts, which is pretty straightforward to do, but cosplayers looking for more of a challenge can play the roles of the gray-skinned, horned trolls. 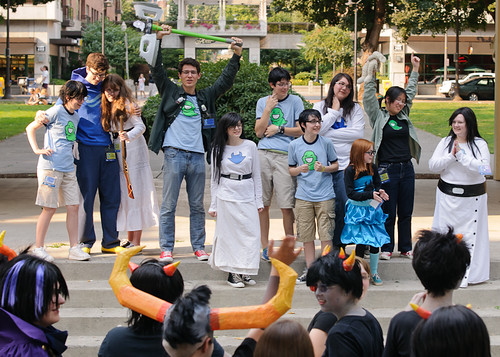 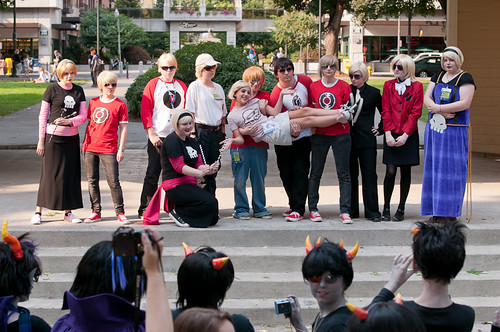 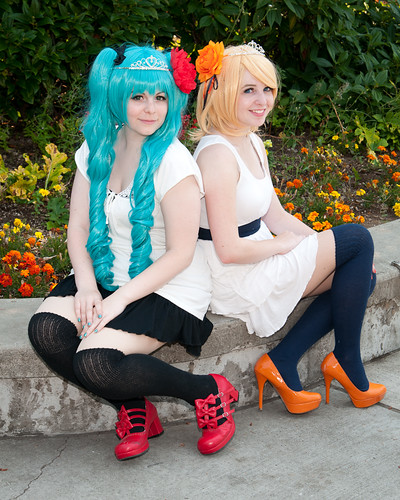 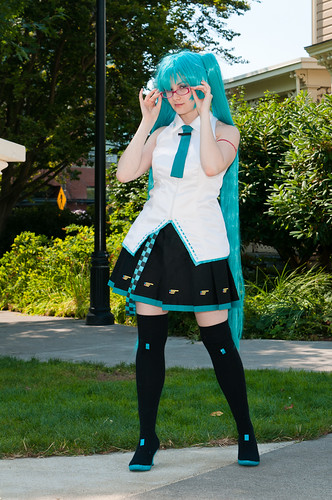 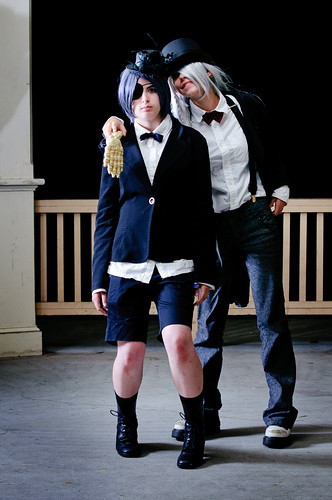 Other popular cosplays came from Black Butler, Hetalia, Panty & Stocking with Garterbelt, Final Fantasy, Kingdom Hearts, Naruto, and the Vocaloids. Crossplay (cosplaying as a character of the opposite sex) was very common, especially females cosplaying as male characters. It’s probably fair to guess that at Kumoricon, if you chose a male character at random, he was more likely to be portrayed by a female cosplayer than a male one. 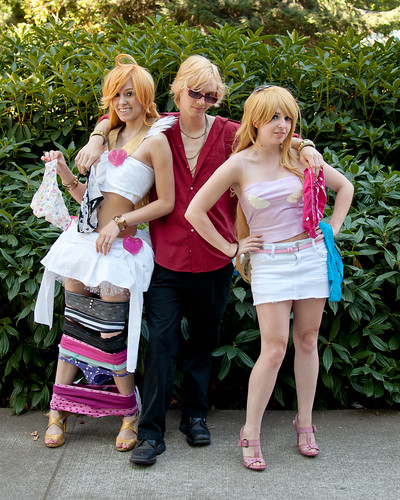 Genderbend cosplay (reimagining the character to be the opposite sex of the original character, but the same sex as the cosplayer) was somewhat less common, but still established. At the Panty & Stocking group photo shoot, a cosplayer showed off a very amusing male version of the character Panty (above, center). 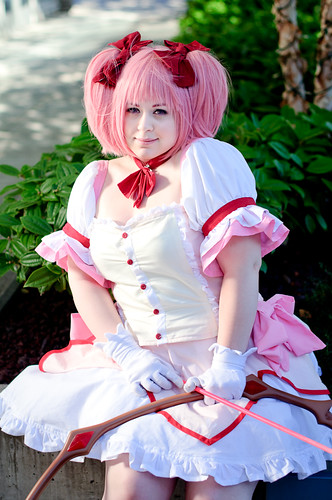 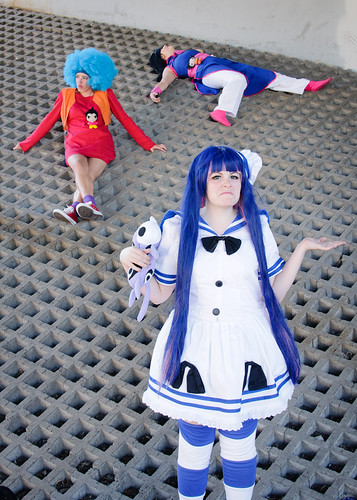 As good as the official events were, some of the best times I had at the convention this year just involved talking to various people and joking around, which seems very characteristic of Kumoricon. One night when a group of us were in the park, we saw a group of Vancouver police headed our way. We wondered what was going on, and one of my friends speculated that perhaps they intended to tell us to leave the park. It turned out that actually they wanted to talk with us about anime! That led to a very fun conversation. I left for a little while to take some cosplay photos nearby, and when I got back the police were still there talking to people about anime and movies, and everyone was smiling and laughing. We went our separate ways, and then the night ended with a few quick photos on the bridge. 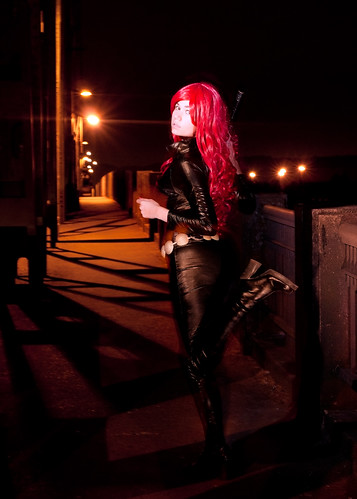 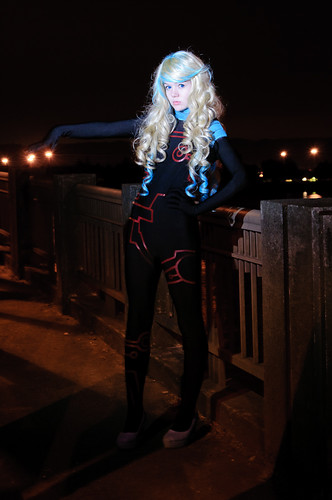 Some kinds of situations naturally create a feeling within a group of people that might be described as a spirit of shared destiny. (Well, at least that’s how an anime might describe it.) People who may have just met start acting more like a “clan” that naturally pulls together. One of the quirks of human nature is that it is often some sort of bad external event that causes this — I’ve personally seen it happen after an earthquake, for example. But the cause need not be a disaster, it can also be something good, like an anime convention. This doesn’t make Kumoricon some sort of utopia where everything is perfect, but it does create a special sense of community, in a way that few other events can match.

Kumoricon will return to Vancouver, Washington next year on September 1-3, 2012. The Kumoricon forums are active all year long, and can be a good way to plan for next year’s convention. I’ll see you at Kumoricon next year!

(See the collection of all my Kumoricon 2011 photos here)