This year was my first preview night. In the past, I’d always turned up no earlier than Thursday to get the most bang for my buck because a hotel night for 3 hours at the con seemed wasteful to me. After the crush last year on Thursday, suddenly that didn’t seem so wasteful. Even preview night was intense, but it was easier to talk to people in Artists’ Alley and I started the con right by talking to Anson Jew first. He’s busy as usual, more with storyboarding commercials than making comics, but he did have a copy of his latest 24-hour comic “The Hand of Fate.” Anson said it’s loosely based on Oedipus Rex. I haven’t read it yet, but I still think Anson is a Noir wunderkind, so if he says it’s based on O. Rex, then it must be based on O.Rex. He’s still drawing comics, but not working on a comic book at the moment. He is working on a non-fiction book on storyboarding, which will be useful for those interested in such things. Anson didn’t say what it’s based on, but I’m sure it will be a Noir book on storyboarding and it will be wunderbar.

END_OF_DOCUMENT_TOKEN_TO_BE_REPLACED

So, Comic Con 2011, yay! As usual I took the train from LA to SD, but this was the first time I did preview night and I loved it. So, I think I’ll do preview night from now on. I got to talk to a lot of artists under less stress than the usual Thursday through Sunday show. Anyway, as you can see from the list below, those reports will be up in the next few days.

While waiting for the train at Union Station, I talked to Martin McIntosh, who owns Outre Gallery and Publishing in Melbourne, Sydney, and Perth. He was going to Comic Con because many of the artists he carries would be there. Starting in a small storefront in Sydney, he’s been handling “low-brow” and comic art for the past 10 years. He said if he’d thought too hard about going into the gallery business, he wouldn’t have done it, but he’s glad he did. He must be doing something right because it’s 10 years later and he’s not only still in business, he’s in triplicate. Later that day I was talking to a fanboy on the wonderful Comic Con shuttle about this gallery owner from Australia I met, and it turns out that the fanboy had ordered art from it. Small world, ain’t it?

The show was as crowded as ever even though I learned later that several big studios (Disney, Warner Bros, and some others [I didn’t even notice because I was only in Artists’ Alley and Small Press area]) didn’t exhibit this year and that there’s a 125K cap on tickets. It still felt like there were way too many people in the hall, but maybe that’s just me.
END_OF_DOCUMENT_TOKEN_TO_BE_REPLACED

Oooh, go see this if you can. I loved it!

I’m working on the CCSD reports. Here’s the Flickr set to amuse you while I write. 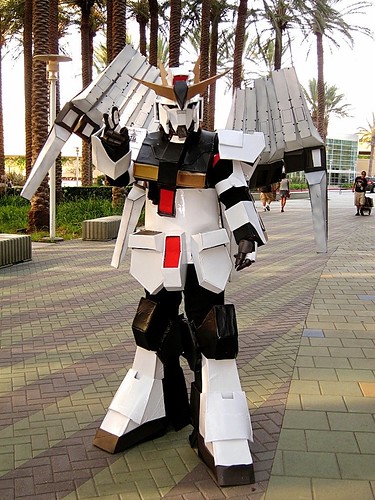 On July 1-3, the new convention AM2 (Animation, Manga, and Music) took place at the Anaheim Convention Center. The convention had an unusual model where the events had free admission, but convention-goers could optionally purchase a “Passport” that would allow them to have priority seating at main events and concerts. This is a great system, because it encourages people who may not have been to an anime convention before to give it a try. From the lengths of some of the lines that were specifically for pass holders, quite a lot of people bought passes. AM2 announced that they had over 8,000 unique attendees over the three day period.

END_OF_DOCUMENT_TOKEN_TO_BE_REPLACED

So, holiday weekend traffic was very kind to me as I drove from LA to OC to pick up Tom Good

(as we were sitting down to lunch [I was starving])

at the Santa Ana airport and off we went to the Anaheim Convention center for Day 1 of the first annual AM2 (that’s AM Squared) Convention. Holiday weekend traffic was kind to us so we got there fairly quickly. It’s been 30 years since I’ve been in the John Wayne Airport. In that time, they’ve built a freeway ramp directly into and out of the airport, so it was much easier than I remembered it. I, of course, used the old way to get in (via MacArthur Blvd) and got lost, but then recovered. It’s a big airport; hard to miss it but I almost did.

Tom checked in and then we went of to get our press passes, which was easier than any other convention I’ve ever been to.
END_OF_DOCUMENT_TOKEN_TO_BE_REPLACED