Attendees waiting for the show floor to open. (This was a familiar sight on all three days at two entrances)

Throughout the the three days, the BEA exhibition hall was open, stretching within the space of a football field, and taking a large portion of the Jacob Javits Convention Center roughly 1100 exhibitors operated. Exhibitors were from the many fields related to book business. Many were publishers, international groups, eBooks, magazines, publishing services, wholesales. I even saw the Espresso Machine somewhere in the bustle. The show gave out a show map, directory and et al, (Updated show directory information) all for listing publisher information, and services that they provided.

Abrams’s display for The Diary of a Wimpy Kid’s 6th Year Anniversary was definitely a treat for attendee eyes.

The exhibition room was arrange in a semi-thematic form, where specific services were arranged in roughly around the same location. Attendees though would definitely require a specific location number to search for an intended publisher. I was pretty surprise to see Tokyopop and Kodansha America were listed, however these recently defunct publishers were not there. Vertical Inc took the spot of Kodansha on Thursday. Google was also an interesting sight for me to see, and I learned that they are getting into the Epub market.

Crumpled City Maps from Emanuele Pizzolorusso proved to be an interesting product. Shows that even a crumpled napkin type can become a unusual and useful pocket guide tool.

Just anything and everything devoted to publishing were around. There were even accessories for book products, something for museum interested attendees. I definitely popped in and out the exhibition room, in between panels. I also made a note to check out the Midtown Stage or the Uptown Stage. Since they had author or noteworthy speakers giving talks/panels there. (John Lithgow was a featured Uptown Stage speaker.)

Other than walking by the Author’s Autographing area once, where there were donation boxes avaliable. That’s something new. At various publisher exhibition locations there were the author booth signings.

For food situation, the amount of time I spent at the Convention center these past several days, I made an attempt to pack easy on the go food to munch on and two bottle of waters. Otherwise the food court on the first floor of the building, mid level were Hudson News, and Starbucks. Outside there were hot dog stands.

The show floor is always a highlight for many attendees, thus the buzz and content were pretty much where the activity was. Downstairs were the smaller, but still busy Blog World Expo Exhibition space. There weren’t as much activity as the BEA show floor, but it proved to be an interesting place to view products other than books. Audible.com, Groupon, WordPress and other New Media type exhibitors were also down there. Blog World Expo definitely had their own separate show going. 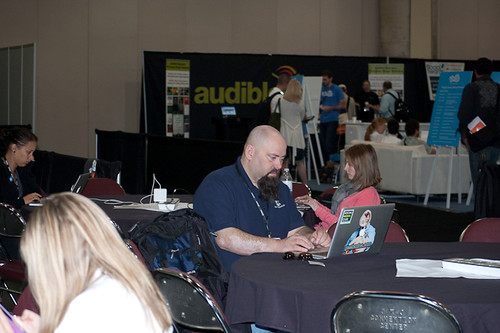 One thing I really happened to like, were the roundtables around Blog World’s exhibition space. There were power strips available for convention attendees to sit, charge their tech gadgets or work steadily away at their laptops for a short amount of time.

Whether it was BEA or BlogWorld, wherever there was an event space there was activity and buzz going on.