Skip to content
Text and photography by Thomas Good 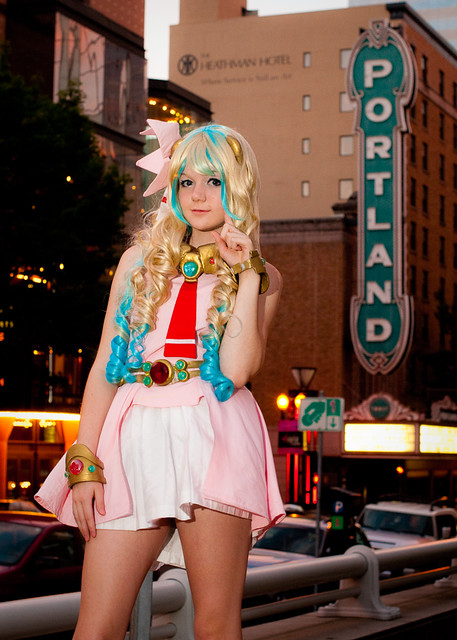 On Labor Day Weekend, downtown Portland came alive with colorful anime costumes, as Kumoricon occupied the Hilton Portland and Executive Tower for the second consecutive year. 4,055 people attended the convention, weekend badges were capped at 3,500 and sold out, and the charity auction raised $3,688 for the Portland Police Sunshine Division. 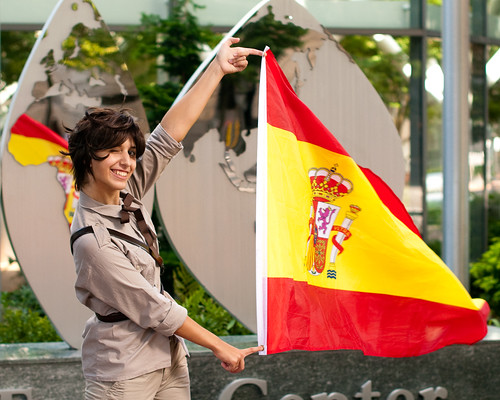 As far as trends go, this was a big year for Hetalia: Axis Powers — a funny webcomic, manga, and anime in which each character personifies a country and the action is loosely based on historical events. Many cosplayers came to Kumoricon dressed as countries from the series. 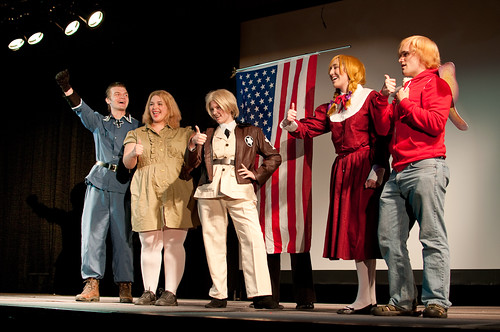 Hetalia skit at the cosplay contest

Kumoricon held a well-attended screening of several short episodes of the Hetalia anime. The enthusiasm of the crowd made actually watching the show into a challenge. When a favorite character came on screen, people would scream their approval so loudly that it was hard to hear the dialogue. Combine that with the fact that the characters speak in foreign accents, and a good number of lines were completely lost. Even so, the show delivered humor and entertainment, and its popularity seemed well deserved.

At the end of each episode, most of the crowd sang along to the show’s theme song in Japanese. Clearly these were not just casual viewers, they were pretty involved fans.

The Hetalia screening included a Q&A session with Todd Haberkorn, the voice actor who plays Italy in the English dub. Haberkorn’s charisma and warmth delighted the audience, and a lot of the questions directed at him ended in the phrase, “. . . and can I have a hug?” He always said yes. 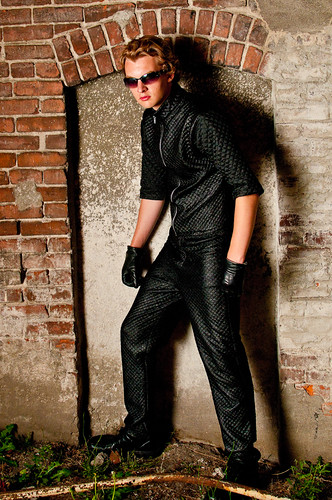 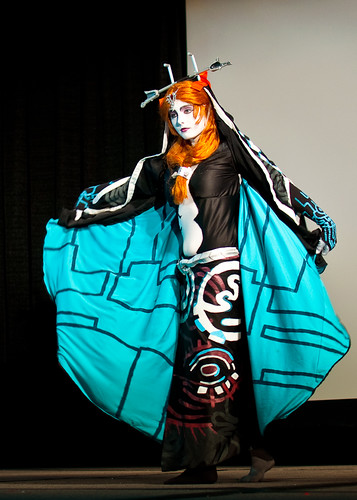 It’s difficult to imagine some other type of convention where a big presentation ends in hugs. I mean, I don’t remember this happening at the Auto Show, or that show about sustainable building materials. But that’s part of the magic of Kumoricon. It brings out some great qualities in people: openness, sharing, and creativity. In the end it feels less like a group of strangers, and more like a large group of distant relatives who don’t see each other very often. 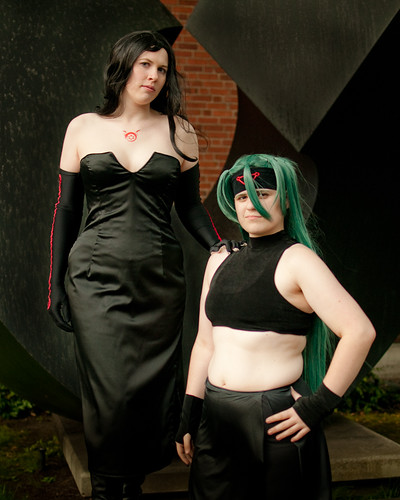 Most of the perennial convention-favorite shows like Naruto, Fullmetal Alchemist, and Inuyasha have aired extensively on U.S. cable TV, and are available on DVD. I was a bit surprised to see the huge popularity of Hetalia: Axis Powers even though it had never been shown on TV here and the DVD had not yet been released. Everyone told me they had seen it online, and that is probably a clue to the future of anime. (Funimation’s panel also emphasized their online presence on Facebook, Twitter, and YouTube, and their online videos.) 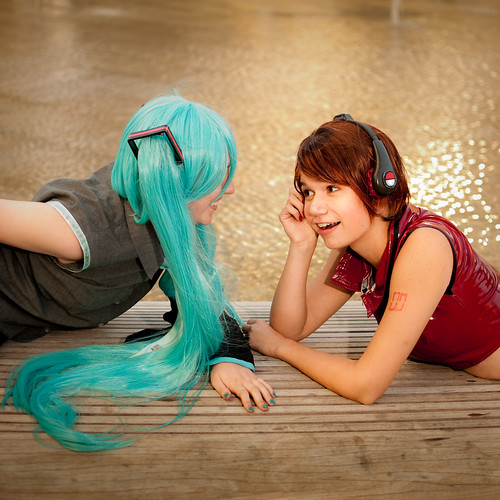 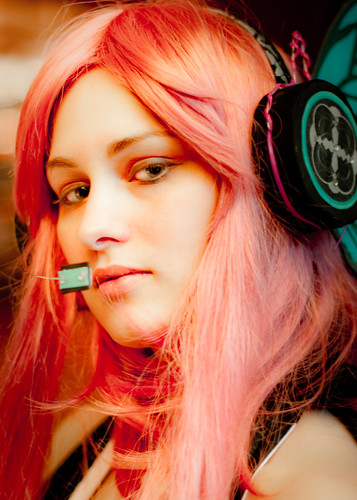 Another popular set of characters was the Vocaloids (pictured above). These are the anime-styled mascot characters for some Japanese music software. I saw some of these characters at Sakura-con earlier this year, and many were represented at Kumoricon, too.

Some people told me they came to the con mainly to “hang out” and weren’t really concerned about whether or not they could get in to particular events. That’s a good attitude to have at a place where some events filled up and even had a line of “standbys” waiting outside, hoping for someone to leave early so they could go in. 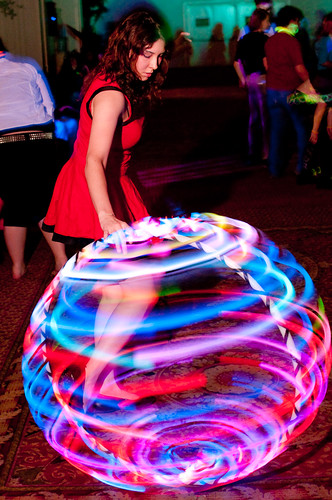 A dancer twirls a glowing hoop at the Kumoricon dance

The dances were another great feature of the convention. Gregor Torrence got some great photos at the Saturday night dance, some are even in 3D if you look at them with red/blue 3D glasses! Check out his Kumoricon 2010 dance photos here.

But McKeever also mentioned some potential dangers for the anime convention circuit. Fans tend to stop coming to anime conventions after they reach age 21, but those people are valuable for conventions because they have more disposable income, so they are good for business for the hotels and the dealers’ rooms.

One of the main things he advocated was eliminating the long wait in the registration line, because it is discouraging to newcomers, and especially to older fans. (Kumoricon’s line this year was, at least for some people, up to a 4 hour wait, though this is not that unusual for anime conventions.) He pointed to Anime Expo, which reduced the waits by outsourcing registration. Then he showed some amazing photos from a trip to a convention in China, where the convention had over 400,000 attendees, but only a 5 minute wait to get in.

When asked why some cities have multiple conventions, some even overlapping in time, McKeever said, “Revenge is not a good motivation for starting a convention.” This was one of my favorite lines of the weekend. He explained that sometimes this happens when one group splinters off from a convention and starts their own, because they are unwilling to continue to work with the people in the original group. But this can dilute the talent pool and wind up hurting both groups.

As a follow up to this discussion, a Kumoricon staffer explained something that had puzzled me, which is why Kumoricon is the same weekend as PAX, since many of the people who go to one would probably go to the other if they didn’t overlap. This one has nothing to do with “revenge” or competition, but it happens because of the varying cost of getting convention space on different weekends. 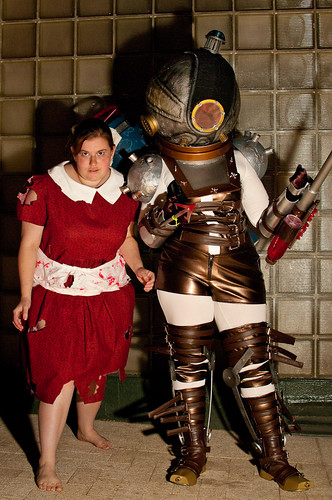 The Big Sister costume from the video game Bioshock 2 (pictured above) got a lot of attention. This was designed by Matt Huntley, Julia Valentine, and Laurence Scerri, and worn by Victoria Scerri. The costume was hard to see out of, hard to walk in, and drew big crowds of non-convention-goers in downtown Portland. Everyone wanted their picture taken next to it. I had to wait until late at night to get good photos of this, when there weren’t as many people around.

In general Kumoricon 2010 was much like 2009, though a few things had changed. Most fans now consider older trends like “The Game” and “Marco Polo” that were funny a few years ago to be more annoying than amusing. And the attitude of Hilton staff towards fans seemed vastly improved since last year, at least from what I witnessed.

Next year, though, Kumoricon is moving back to Vancouver, Washington, at the Hilton Vancouver Washington and the Red Lion Vancouver at the Quay. This was the location used in 2007 and I thought it worked well then. The nearby park is ideal for cosplay photography, and the views of the Columbia river are also nice. I’m looking forward to going back to this location. I highly recommend Kumoricon as a good entertainment value for a fun 3 day weekend. And since some people start getting together on the Friday before the convention officially begins (“Day 0”), it can really be closer to 4 days.