Reported and Photographs by Linda Yau

Wednesday and the Exhibition Hall opens. The show room was noticeable smaller than last year. I spent most my time on Wednesday walking around the show room, and noting the different sections. There were meetings, networking, authors and fans all around.

To the right is a long line, but this was where certain high profile authors were, signing their works. Authors were either here or at various exhibition booths.

This was a display in one of the booths: a giant typewriter. Several impressions: the wow factor of this typewriter being so big, and another is the significance of writing. I am pretty impressed, and in this day and age of all the iPads and computers, the typewriter is pretty dated. Yet memories of that familiar bell sound and the motion of seeing a paper move up and down is as familiar to writers, who use other than a pad and pencil/paper to write down their thoughts.

I was able to pick up Gina Mollicone Long’s release of Think or Sink: The One Choice That Changes Everything.

This was one booth that I definitely enjoyed stopping by -Bill Barnes one part author/creator of Unshelved, which is a popular librarian comic. They would be doing a panel on Sunday, interviewing Nancy Pearl – librarian action figure model. 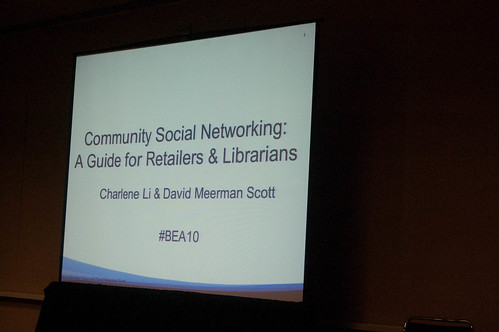 On Wednesday, a panel that I was able to attend was the Community Social Networking: A Guide for Retailers & Librarians. This was a presentation made by Charlene Li and David Meerman Scott. The room simply wasn’t as packed as Day 1, but the presentation was filled with useful information on what a professional can do in taking charge of a social online presence for their products.

Here are some points I heard:

There are lots of trials, and sampling, but try to think about your identity in five years, and where it should be?

Thursday
This was the last day for this year’s BookExpo. Of course it was jam packed as it was the last two. I had some technical difficulties with my camera, so some of the images I got to take were with my cell phone.

I attended two panels today. The first one was The Next Decade in Book Culture: A Conversation sponsored by the National Book Critics Circle. This panel was done to a packed room listening to a roundtable discussion of book reviewing in the next decade. These are points that I was able to take down, and these are video footage from the panel that I attended.

So the next and last panel I went to is Nancy Pearl Unshelved, and this was an easy going, light conversation between Nancy Pearl, who is the model for the Librarian Action Figure, and the creators of Unshelved… (got a picture of Bill Barnes).. This is a video clip of the entire conversation.

For more pictures of this year’s convention take a look at Flickr for more.

For other coverage of last year’s BEA from Journal of Lincoln Heights check out these links: