This past weekend on September 25-27, was the third annual New York Anime Festival also abbreviated NYAF by regular con goers, and Twittter alike. As a tool of instant communication, Twitter was referred to countless times this weekend. With many of the conventions this past year that I have been able to attend, it has became the norm to see people possibly on their cell phones, tweeting if you must know. Now If you look on the right side column, you will see the Twitter widget that JLHLS has. For following any NYAF news, type in #nyaf, and many of twitter responses will pop up. Personally I was able to twitter some updates via text, but if you were willing to have money for the Wi-fi service at Jacob Javits, then many live blogging updates have reach fans and interested people. This is a report on what I was able to see and take back.


What did I experience this year at NYAF? What was different and what was similar?

Different– I-hsiu and Jilly weren’t able to make it this year, so I was solo with the assistance of Eric, who has since New York Comic Con joined up with JLHLS as a photographer for New York events. West coast has Tom and Gregor, so I can safely assume that this is the East coast reps. I also bumped into fellow reviewer Lauren. Useful, and on the spot tweets were available from @NY_Anime_Fest

Similar – lines policy was similar – there were ticketed events, industry driven. Fans yes, guests of honor yes, events yes, cosplayers yes, and so, the groove was on. 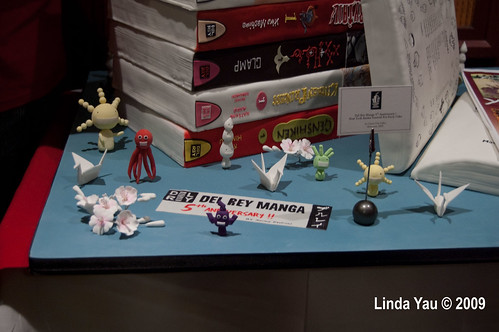 My experience begins at a pre-official con event, on Thursday at Time Square’s Dave & Busters Restaurant. NYAF was co-sponsoring with Del Rey Manga a public event for a night of cake, giveaways, and fun. Del-Rey was celebrating its fifth year in production and this was a 21+ event, but minors can enter with adults accompaniment. An attraction of this event was the cake creation by Food Network’s Ace of Cakes, and the fact that the cake was cut with a katana. As a fan of Japanese culture, I was thinking sacrilegious for a killing weapon to be used in such a manner, but someone mentioned later that it was thus killing the cake. Check out this article from Japanator about the cutting of the cake. There was a special drink menu specifically created for the pre party, and let’s just say that it was an interesting mix to say the least. I happen to take a few shots of those concocted drinks and the cake etc. Check out this Flickr for images from the pre-party. At the party, I met up with Omo from Japanator and Moritheil from Anime Diet. The cake was really sweet from a bite I tried, and mobbed quickly. Morithel mentioned that the waiter had several times gone a back way route. Oh well.

Moving onto the next day when the convention is slated to be opening at 1pm. However, people have been lining up since 7:00 AM to enter. One reason, Yoshiyuki Tomino, creator of the ground breaking Gundam series in the late 1970’s that defined the concept of mecha up to now. Mecha is a genre within Japanese animation for machine operated robots type works. So autograph tickets were in great demand on first come first serve basics. After getting my badge at around 10-ish am, I stood with Eric, Moritheil, and Tony from Samurai Beat Radio waiting. There’s a picture of the line on Friday to the dealer’s room. Eric was taking some picture of some interesting cosplayers. This is one of the cosplayers he took, not necessarily on Friday.

The convention opened up promptly, and I was on my way to the first panel. Some time was spent trying to figure out the layout of the convention. Eric and I missed the Opening Ceremony, which I found out later, that it was quite a quick event.

So the first official panel I saw was “How To Become Famous On The Internet.” The panel had Michael Pinto from Fanboy.com, Adam Ghahramani from TheOtaku.com, and Gia from Anime Vice.

These points were discussed:

This was a panel that I had always missed since I started to cover New York conventions since last year, I saw Vertical at NYAF 2008, and perhaps NYCC 2009. So I made my way to the panel, where Ed Chavez, editor of Vetical presented the panel. I met Ed through Rachel at the Brooklyn Book Festival, and was pleased to learn more about this publication. This panel was at the same time as Tomino’s keynote time, so the room was filled with press members as Ed confirms before he began his presentation. Vertical didn’t start out as a graphic novels pubication, it began with prose books, and has expanded into novels, cookbooks, dietbooks, and manga titles. It has recently outperformed Random House, mainly fort its reason of range and flexibility.

Ed Chavez at the podium.

Readers can check Vertical for their publications. Anime Vice also did a live blog of this panel. This is what I heard that is going to be released from Vertical in the upcoming year 2010 year:

That ended Friday panels for me, as I waited with Moritheil and Eric for Tomino’s autograph. Moritheil even blogged about this aspect with the signing. That was a success!