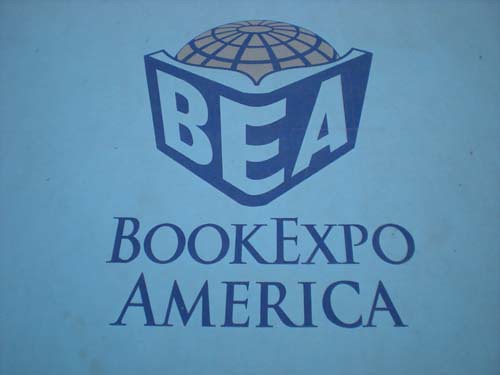 Book Expo America, the largest book convention in the US, concluded on May 31, 2009 after 4 days of fanfare and dire predictions. Attendance was down this year significantly (11% below the previous BEA held in NYC). Many publishers who had exhibited in past years decided to sit this year out. Finally, many attending publishers greatly reduced the size of their booths.

So it leaves one to wonder, when it comes to the changing landscape of the book industry, are publishers getting smarter, is money simply getting tighter, or is it a combination of both?

The convention was a startling contrast to last year’s exhibit in LA where the number of free bags, free books and booth beer festivals was greatly reduced. The McGraw Hill bag, this year’s “it” bag to get, was only available to educators and librarians. Some in-booth autograph sessions were limited to either “bookseller only” or “educator only” events. And many of the authors in the autograph area were signing cover prints or 32 page samplers instead of complete books. Not to mention that many of the authors signing actual books ran out of copies within the first few minutes of their signing periods.

As I stood in line with booksellers, other authors, librarians and even a few exhibitors, reactions were mixed. Some librarians, commented that the freebies were important for them to help offset the cost of traveling to the events. (One librarian had calculated how many books she had to pick up each hour to make the trip worth her while!) Others felt the opulence of previous BEA’s had gotten out of hand turning the show into a free-for-all freebie fest while the purpose, books, was lost. 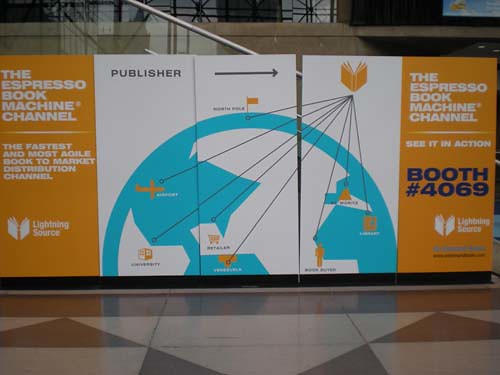 Technology was the forefront of many panels and discussions and one of the many ways publishers are trying to be smarter. The most interesting discussions focused on the new print on demand Espresso Book Machine. 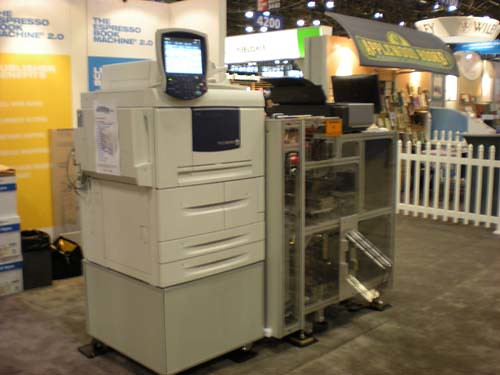 This giant can spit out a 300-page book in less than 3 minutes. While it looks like a cross between a photocopier and one of those giant mainframe computers from the 80’s, this little baby could be the salvation of many small and independent publishers around the world. The largest expense for a book publisher is printing and warehousing books. This nifty gadget takes care of those 2 birds with one stone. While, the books it prints aren’t anything fancy – no embossing on the cover, etc. – you can barely tell the difference between the print on demand book and a standard trade paperback.

Print on demand definitely looks like the wave of the future. Imagine going to a coffee shop, selecting the book you want to read, and having it printed and bound by the time your cup of coffee or tea is ready. And you have the added benefit of not being disappointed that the book you want is not in stock when you swing by the bookstore.

With the new Kindle and improvements in other mobile reading devices, ebooks were definitely a hot topic at this year’s BEA. From the impact of free books on book sales to the threat of piracy on the internet, the book industry seems to be taking a proactive stance on the issue, taking many lessons from the music and movie industry. According to recent studies 8% of the American population bought an ebook in 2008. But 15% of the American population admitted to reading an ebook!

The most informative panel “Giving it Away, When Free Ebooks Make Sense and When They Don’t” looked at a few case studies when giving away free content both helped and hurt the book sales. Wiley, a non-fiction publisher, gave 2 examples of how “free” has greatly increased the revenue of 2 of its brands – Cliff Notes and Frommers.

For Frommers, it is easy to see how a website that lists sections of these travel guides can stand to make a lot of money via advertisers. The website contains sections of the book in a nonlinear form so you cannot read the complete book from beginning to end. Also, the way the site is designed, it takes the browser 6-7 clicks to get to the content that they want, giving Wilery 6-7 pages of advertising space for each search! It is easy to see why Frommers is the #1 travel website and travel guide for 2008.

Cliff Notes makes money off of “free” ebooks by allowing readers to veiw almost the entire book for free online. The key being that they have to be tethered to the internet to access the free content. Wiley has found that 25% of viewers purchase the pdf after viewing the ebook and they have experienced double digit growth each month since launch of the site. Not bad! And it is no surprise that $5.99 for the pdf is a small price to pay for students hoping to finish reading the files on the bus ride to school!

Of course, for every free ebook success story, Wiley has had its failures. So they have broken down the “free” model into a few tests that they apply to each title:

1. Free does not cannibalize paid

2. Free does not dilute the brand or franchise

The key that was made during the presentation was that “free” is not free to the publisher.Wiley is actively pursuing “free” options of their entire catalog on a case by case basis to make sure they maximize the sales revenue of each title. It looks like the book publishing industry is learning a lot from the newspaper industry which is definitely suffering due to “free” content.

Social media and Web 2.0 were the buzz words of the weekend with many panels focusing on using facebook, twitter and other online social networking tools to promote books. I attended a panel on social networking for authors and the general consensus was that you have to do what you have to do to sell your own book. So if twitter is the next big thing, get yourself a feed and start tweeting. If myspace is going out of style, grab a facebook page. Of course, content is king, so the panelists cautioned doing something just for the sake of doing it. No one is going to read or follow it if it isn’t interesting.

But as many of the panelists were quick to note, with decreasing budgets, many publishers are leaving the marketing up to the authors these days on titles not their blockbuster superstars. And since social networking is “free” in the sense that is requires time but not cash, many authors saw value in it. With decreasing marketing budgets, keep an eye out for more book based networking sites like Scribd to show up.

Much like E3 and other entertainment trade events have condensed their shows due to budget constraints, BEA will go from a 2 days of programming and 3 days of exhibition format to 1 day of programming and 2 days of exhibition starting next year. Also, instead of spanning a weekend, the convention will run from Tuesday to Thursday. It will be interesting to see how next year’s BEA stacks up against this year.